The fifteenth annual Farming Scotland Conference hosted delegates from across Scotland’s agriculture sector when it took place on Thursday 8 February at the Carnoustie Golf Hotel & Spa.

The conference title was ‘Innovations in Farming’ and each of the conference’s four speakers addressed this over-riding theme from the context of their own positions within agriculture.

John Kinnaird, the Scottish Government’s Agriculture Champion for Sustainability stressed that farmers must be encouraged to keep the preservation of the country’s natural capital as a key priority by a carrot rather than a stick approach. He would like to see greater flexibility in future systems through which Scotland’s farmers are rewarded as environmental custodians.

Professor Colin Campbell, Chief Executive of the James Hutton Institute was next to address the conference and he highlighted several areas where research currently being undertaken will lead to tangible benefits in farming in the future.

The world first achieved by the Hands Free Hectare team was then explained by the project leader, Kit Franklin of Harpers Adams University. Kit and his team managed to grow a hectare of barley without a human entering the field using autonomous machinery and drones. Kit provided a vision for the future with swarms of small autonomous machines working the land and improving soil health – truly precision farming in his view.

Chris Newenham, joint MD of Wilkin & Sons Ltd which farms at Tiptree in Essex, was the conference’s final speaker. Chris demonstrated how a traditional approach to farming at Tiptree has been married with innovation to ensure that the company and its farming operations remain competitive.

EQ were delighted to organise and co-sponsor another successful conference. EQ Partner and conference Chairman Graeme Davidson said “The speakers brought the conference theme of ‘Innovations in Farming’ to life and it was fascinating to hear their visions for how sustainable farming in Scotland could look in years to come”. 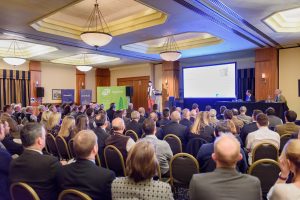